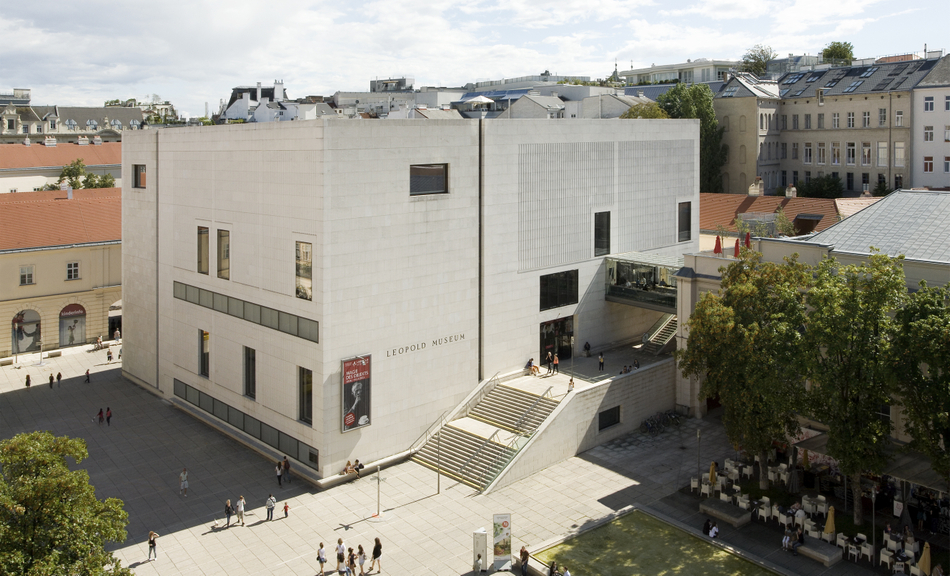 The Leopold Museum, with some 6,000 artworks, houses one of the world’s most important collections of Austrian art, focusing on the second half of the nineteenth century and subsequent Modernism. The intersection of art with the intellectual world of “Vienna around 1900” is uniquely accessible at the Leopold Museum, where art historical developments from the Biedermeier period to Atmospheric Impressionism to Expressionism to New Objectivity can be followed in great depth. The museum’s holdings are based on the collecting activities of Rudolf and Elisabeth Leopold, two ophthalmologists who as superior connoisseurs amassed a unique collection over the course of five decades, beginning in the 1950s. Their extraordinary passion for art enabled them to collect artists such as Egon Schiele and Gustav Klimt – whose works, up until the 1960s, were considered taboo and so could be acquired for comparatively modest sums. The world’s most comprehensive Egon Schiele collection was thus established with more than 220 works. In 1994, the Leopolds contributed the lion’s share of their art treasures – 5,200 works, with an estimated value around 570 million euros – to the newly established Leopold Museum Private Foundation in exchange for payment of 160 million euros by the Republic of Austria and the Austrian National Bank. A portion of their original collection continues to exist in form of the Leopold Private Collection. In 2001, the acquired collection moved into the specially built "Leopold Museum" – designed by architects Laurids and Manfred Ortner – as part of the MuseumsQuartier complex. Rudolf Leopold served as the museum’s director until his death on June 29, 2010. In addition to the preservation of the collection, its public presentation, and ongoing scholarly reappraisals, a key objective of the Leopold Museum today is the expansion of the collection through acquisitions and the presentation of permanent loans.