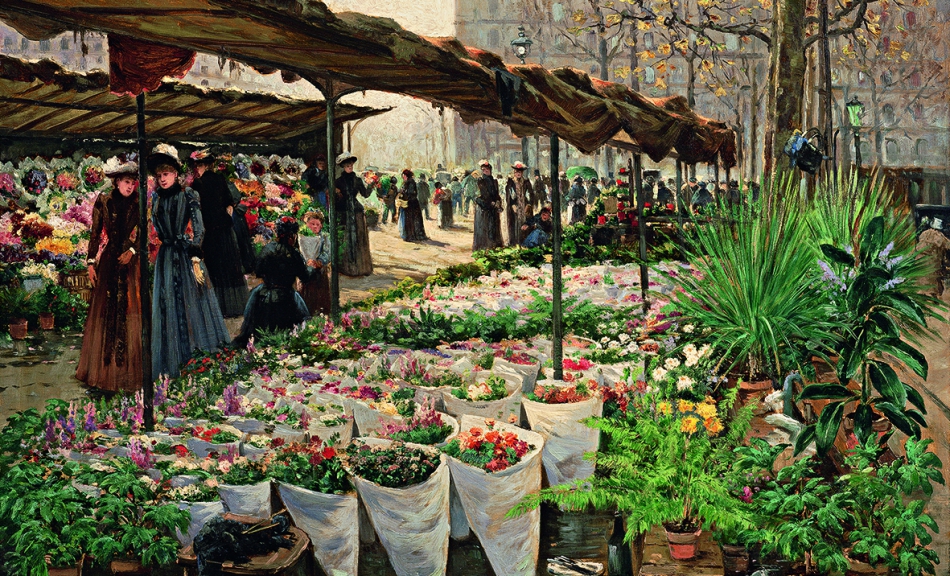 The main characteristics that distinguish the Austrian Biedermeier period, which refers to an era between the Vienna Congress 1815 and the democratic Revolutions of 1848, are a retreat into the private sphere, the motif of “home sweet home,” and a tendency to trivialize the subject of a painting. The most popular purveyor of this style was Ferdinand Georg Waldmüller. In paintings such as The Interrupted Pilgrimage, his mastery of lighting design and keen observation of rural life struck a chord with upper-middle-class collectors and their longing for images of “ordinary” people. Michael Neder also emerged during this time, a chronicler of the goings-on in Vienna’s suburbs in the pre-March era (otherwise known as Vormärz), whose paintings remained in a contemplative key. In Friedrich Gauermann’s work, dramatic weather conditions in Alpine landscapes were emphasized, in a manner seemingly rooted in the Romantic period.
In contrast, visual precedents from the High Renaissance and the Baroque, motifs from ancient mythology, as well as a sensual, narrative style of depiction determine the historicist painting of the Ringstrassen era. In addition to works by Hans Makart, Hans Canon, and the Orientalist painter Leopold Carl Müller, the Leopold Museum also has significant works by Anton Romako, whose vagrant, idiosyncratic painting style, entrenched between the historical canon and a heightened sense of subjectivity, led the way into the twentieth century.
Apart from historicism, starting in the mid-nineteenth century locally influenced plein air painting gained ground. Using subtle shades, the circle around Emil Jakob Schindler, the so-called Austrian Corot, turned to the depiction of decidedly unheroic landscapes permeated by lyrical moods. The high mountains of the Romantics gave way to swamps and ponds, with natural spectacles in the sky no longer requiring a narrative framework. In touch with the work of the Munich Realists as well as with works from the Barbizon and Hague schools, artists such as August von Pettenkofen, Tina Blau, Olga Wisinger-Florian, Eugen Jettel, Robert Russ, Theodor von Hörmann, Carl Schuch and other proponents of Austrian Atmospheric Impressionism followed Schindler’s proclaimed goal “to consistently observe the changeable.”