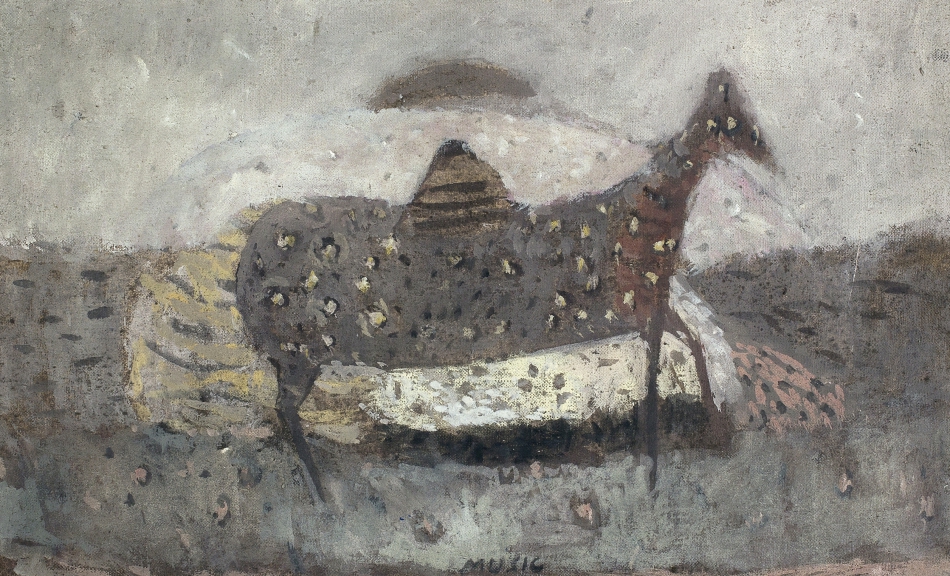 Zoran Mušič (1909–2005) had already been an established Slovenian artist by the time he was deported to Dachau concentration camp for several month in late 1944. The drawings he created there are harrowing documents of that time. After the War, the artist moved to Venice, where he created icon-like portraits of his wife Ida Barbarigo as well as his first unmistakable Cavallini from Dalmatia. Meanwhile, Mušič traced the erratic lines of the earth’s relief in the hills of Umbria and Tuscany. When he was signed on by the Galerie de France in 1952, he moved to Paris, where he lived for long periods of time. From 1948 he participated several times in the Venice Biennale, featured with some of his works already in 1955 in the documenta I in Kassel, participated in numerous other international exhibitions and received various awards. In the mid-1950s Mušič defined the landscape as well as his paintings’ protagonists as a sort of ornamental fabric in his color-intensive works, and soon afterwards ventured into abstraction. This phase lasting until 1963 was superseded by a cycle of works in which Mušič arrived at an increasingly anthropomorphic notion of landscapes. The inextinguishable trauma of his experience at the concentration camp was processed by the artist in his 1970 picture cycle We Are Not the Last. These unsparing visions of horror were followed by atmospheric renderings from Mušič’s adopted Venetian home as well as by numerous self-portraits painted using muted colors. They are testament to his untiring quest for answers to the basic questions of human existence. Featuring more than 160 loans from several international collections, the exhibition presents works from all periods of this silent loner’s oeuvre.