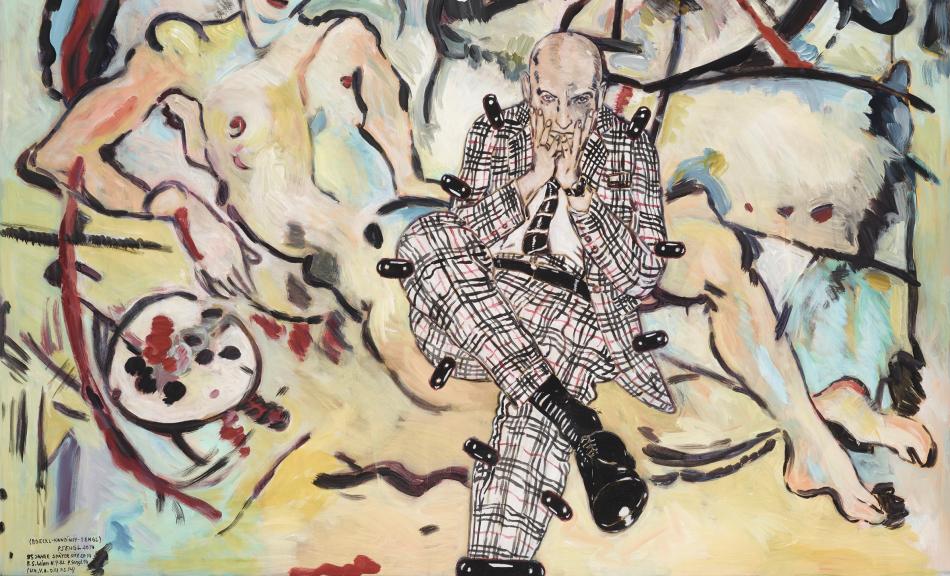 This comprehensive exhibition dedicated to the painterly and graphic oeuvre of the Austrian artist Peter Sengl (born in 1945), who lives and works in Vienna, affords not only retrospective insights but also surprises with new works.

Peter Sengl’s oeuvre is among the most idiosyncratic in contemporary Austrian art. From the outset, he wanted to create “singular and instantly recognizable” works. As a painter and draftsman he soon developed his own unique and primarily figurative style. In his works he links graphic elements with painting with a visual processuality in a fascinating manner, the repeatedly surfacing gestural character creating an energetic and intense pictorial language.

Sengl is a brilliant, unfathomable and analytical visual narrator for whom reality is more real than oneiric worlds such as those encountered in Viennese Modernism. A vast resource of photographic images, compiled over decades, serves as the basis for his collage-like pictorial inventions.

The main theme of his oeuvre is man within the network of animalistic nature and instrument-based existence. He blends profound and unfathomable elements with an unexpected humor and subtle irony. His allusions to art historical works are as significant as his numerous self-portrayals and the titles of his works which, as literary miniatures, have become the signature of his oeuvre. For the exhibition at the Leopold Museum Peter Sengl has created a special series in which he addresses paintings from the museum’s collection.

Peter Sengl was born almost 70 years ago, in March 1945, in Unterbergla in the district of Deutschlandsberg situated south of Graz. In 1963 Sengl started studying at the Vienna Academy of Fine Arts under Professor Sergius Pauser (1896-1970). In 1965 the young artist met his future wife Susanne Lacomb at the legendary Viennese coffee house Café Hawelka. Apart from being a frequent model to her husband, she has been the artist’s most important companion throughout his career. In 1974 Peter Sengl and Susanne Lacomb had a daughter, Deborah, who is also a successful artist.

Peter Sengl’s first exhibition was held in 1970 at the Graz Forum Stadtpark. This was followed by a 1971 exhibition in Vienna organized by Otto Breicha (1932-2003) and held at the Künstlerhausgalerie. To date, Sengl has had numerous solo exhibitions in Austria and abroad. Countless exhibition participations have further cemented the importance of Peter Sengl’s oeuvre. Among his most notable presentations were his solo exhibitions at the Neue Galerie (present-day Lentos Museum) in Linz (1977), at the Austrian Institute in New York (1980), at the Museum moderner Kunst (mumok) in Vienna and at the Rupertinum (which today forms part of the Museum der Moderne) in Salzburg (both in 1988), at the Kunsthistorisches Museum in Vienna (1995), at the Historisches Museum der Stadt Wien (present-day Wien Museum – 2001), as well as at the Neue Galerie in Graz (2004).

In 1971 Sengl received the art award of the Forum Stadtpark as well as the incentive award for visual arts from the State of Styria. In 2007 he received the art prize of the City of Vienna and in 2013 his longstanding social commitment earned him the title of “consul” of the Austrian Red Cross.