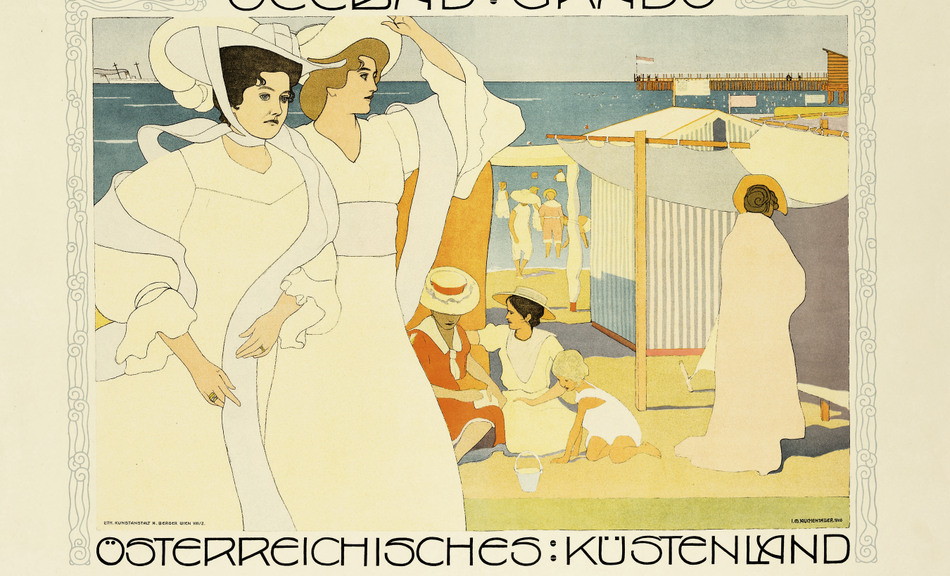 The Leopold Museum is going to show the first big exhibition of Josef Maria Auchentaller in Austria. Josef Maria Auchentaller (Vienna 1865 – Grado 1949) was one of the artists who participated in the Viennese art revolution that occurred at the beginning of the 20th century. For more than a decade, the painter and graphic artist was an active protagonist of the Secession, which had been founded by Gustav Klimt in 1897. He participated in the Secession exhibitions around 1900, at times in a position of responsibility for organisation, and was also involved in the publication of the magazine “Ver Sacrum”, the Secession’s official organ. His decision to leave Vienna in 1903 and to risk the “tourist” adventure in Grado isolated him prematurely from the Vienna art scene.

During recent decades, art historians have found it difficult to firmly establish Auchentaller’s position among the Viennese Secession artists. First and foremost, in making an adequate assessment of his achievements scholars have been faced with the difficulty of tracking down his works (many of which are in the private collections of his heirs), with the result being that the artist has remained more or less unknown. The unpublished dissertation by Vera Vogelsberger (Innsbruck, 1985) represents the only major research effort in recent years, and it constitutes the first serious attempt to examine and catalogue Auchentaller’s paintings and graphics.

The current exhibition has come about thanks to the readiness of the heirs to provide works on loan, the wish to make available to the public the work of an artist who has received so little attention, and the conviction that the true meaning of the Vienna Secession can best be understood by increasingly broadening the art-historical perspective to include as many of the artists involved in the turn-of-the-century movement as possible. The show was conceived as a travelling exhibition and was first presented in Gorizia, where it was on view at the Musei Provinciali in the Palazzo Attems-Petzenstein from April through September 2008. Between October 2008 and January 2009 it is being shown at the Galleria Civica in Bolzano. In the summer of 2009 it will be presented at the Leopold Museum in Vienna.

The exhibition is divided into eight sections and includes approximately 300 works: paintings, drawings, studies, posters, designs, jewellery and photographs, many of which have never been shown publicly. Auchentaller’s artistic development is traced through his training in Vienna and Munich and the decisive influence exerted on his work by the Vienna Secession as well as in his later years, when he settled in Grado and devoted his artistic energies to landscapes and portraits.

The exhibition is accompanied by a bilingual catalogue (Italian/German, 240 p., Edizioni esaExpomostre) edited by curator Roberto Festi, which includes a complete listing of and critical commentary on all exhibited works.

Born in the Vienna district Penzing into a family from South Tyrol, Josef Maria Auchentaller attended the Technical College in Vienna from 1882 to 1886. He began at the Academy of Fine Arts in 1890, and during his studies there he received a number of prizes and awards. From 1892 to 1896 he lived in Munich, where he came into contact with the local Secession movement. He was involved in the magazine “Jugend”, and thanks to his artistic maturity he became a protagonist of Viennese artistic life.

He joined the “Association of Fine Artists” known as the “Secession” in its beginning phase and played a role in the institution’s organising committee – from the Fifth to the Tenth Exhibition (1899–1901) – then resigning in 1905 together with the artists of the Klimt group. For the Secession, which completely reoriented Vienna’s position in contemporary art, Auchentaller designed the poster and the catalogue cover of the Seventh Exhibition (1900). For the Fourteenth Secession Exhibition (1902), at which Max Klinger was represented by his famous Beethoven statue, Auchentaller created the large frieze “Freude schönen Götterfunken” (its title taken from the first line of the poem by Friedrich Schiller as used in the Ninth Symphony), which was exhibited across from Gustav Klimt’s Beethoven Frieze. His rich work in the field of portraiture, a genre to which he remained true throughout his life, was represented at the Tenth Exhibition in 1901 by a full-figure depiction of his wife Emma.

Auchentaller also participated actively in the publication of the magazine “Ver Sacrum” (he was a member of its editorial committee in 1900 and 1901) for which he realised two covers and numerous graphics. Here he primarily made use of floral motifs, displaying a stylised linear approach influenced by Japanese woodcuts. The eighth issue of the fourth volume (1901) was devoted entirely to Auchentaller, who was not only presented as a graphic artist, but also in his extensive work in the arts and crafts field.

In 1903 Auchentaller moved with his wife Emma née Scheid and their children Maria and Peter to the Italian town of Grado on the Adriatic coast, where he made a decisive contribution to the development of its potential for tourism. Built after plans created by the architect Julius Mayreder, the “Pension Fortino” was operated by the Auchentaller family with admirable entrepreneurial spirit and soon became a favourite destination of the Viennese haute bourgeoisie. For Grado the artist designed a famous poster advertising the “Seaside Resort Grado: Austrian Coastland”, which was printed by A. Berger in Vienna in 1906 and demonstrates with great flair the spirit of Jugendstil.

Auchentaller’s family connections to the Scheids and the Thonets were also of key significance in his career, and he designed numerous pieces for them – in an “international” climate of active cultural exchange. For Georg Adam Scheid’s jewelry manufacturing company, G.A.S. Silver Jewelry Manufacturers, the artist created a variety of jewelry designs highly characteristic of the Jugendstil era. With great interest, the artist also devoted his attention to poster art, being well aware of its power to disseminate ideas, messages and products from the very beginning. He designed and executed numerous advertising posters for a variety of products and events, which distinguish themselves through their heavy stylisation and synthesis of graphic ideas.

From 1904 onward Auchentaller always spent the summer in Grado. At this time his contact to the Vienna art scene already began to weaken, although friends such as the painters Carl Moll, Alfred Roller, Wilhelm List and Maximilian Kurzweil and the architect Otto Wagner visited him occasionally. From this time on, Auchentaller devoted his artistic attention to portraiture and landscape painting, with his style continuing to display the typical graphic elements of Secessionism.