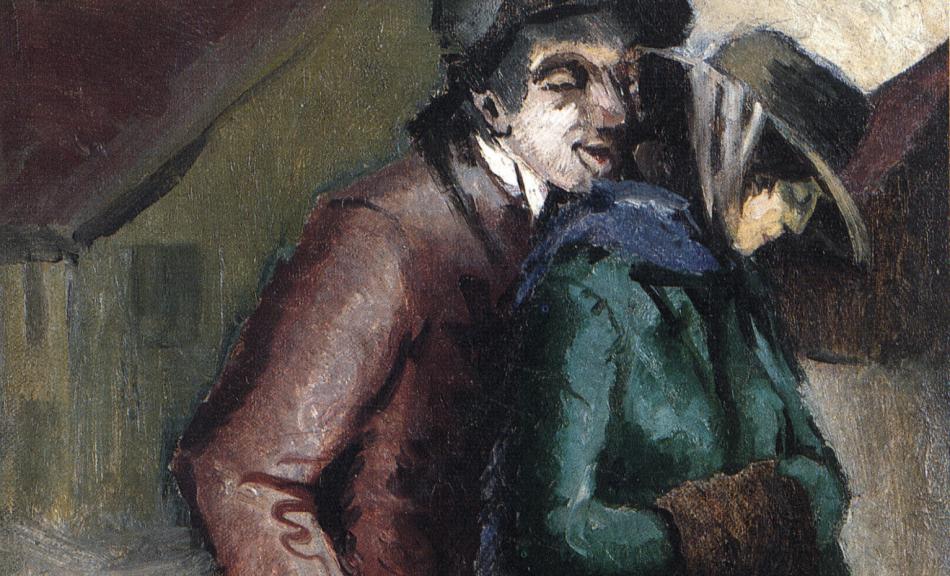 The Leopold Museum is presenting a representative overview of the work of the rediscovered Norwegian painter Aksel Waldemar Johannessen. The artist’s key works are being shown for the first time in Vienna in an exhibition featuring approximately forty paintings. Rudolf Leopold has personally selected the artworks to be shown in the exhibition.

Born in 1880, Aksel Waldemar Johannessen studied sculpture at the State Art School in Oslo. Together with his wife he founded a workshop for traditional clothing and folk art. He maintained close contact with the Norwegian literary couple Arne and Hulda Garbor, the founders of the Norwegian Theatre, for which he designed sets and costumes. Johannessen began painting in 1912, although his work as a painter remained for the most part unnoticed by those around him. Until his early death he produced numerous paintings, but refrained from letting them pass out of his ownership.

In these works Aksel Waldemar Johannessen devoted his attention to socially critical themes from the world of workers, drinkers and prostitutes, depicting their sensuality and their deprivations. His paintings provide insight into the disturbing abysses of human existence. Many works are painted in a crass realism and have a strikingly expressive effect. Like many of the protagonists in his paintings, the artist was also headed toward a dramatic end. Aksel Waldemar Johannessen’s early death at the age of 42 was a consequence of excessive alcohol consumption. Among the causes of his desperation was his wife’s affliction with cancer. She died a short time later.

Aksel Waldemar Johannessen did not live to experience the first exhibition of his paintings, which was presented by a leading Oslo gallery. After his death, the paintings soon fell into oblivion. His work remained unknown until it was rediscovered by the Norwegian art aficionado Haakon Mehren in 1990. Since then Johannessen’s paintings have come to be considered a significant Norwegian contribution to Expressionism.

Born on 26 October in Oslo (Kristiania).

Attends the State Arts and Crafts School in Oslo, with training in sculpture under Lars Utne starting in 1902. Beginning of a lifelong friendship with the writer Kristofer Uppdal.

Debut as a sculptor at the annual “State Art Exhibition” in Oslo.

Marriage to Anna Gjermine Nilsen. Move to Gjövik and employment at the Sandvold furniture workshop as a designer, wood carver and model maker.

Return to Oslo. Anna opens a tailor’s workshop. First contact with social reformer Fernanda Nissen as well as with writer Hulda Garborg and her husband, Arne Garborg. Aksel Waldemar Johannessen begins to paint, although his paintings remain for the most part unknown to the public.

The company founded by Aksel Waldemar and Anna Johannessen (Heimen Tegnekontor) is officially registered. It specialises in traditional arts and crafts and in the design and fabrication of folkloric dress. First costume designs for the “Norske Teatret” (Norwegian Theatre) founded by Arne and Hulda Garborg.

Aksel Waldemar and Anna work for various theatres and operate a mail-order company. During these years Aksel Waldemar produces numerous paintings. He hires a summer house in Asker and maintains close contact with Arne and Hulda Garborg and Kristofer Uppdal.

Anna Johannessen is diagnosed with cancer, Aksel Waldemar falls into a deep depression.

16 January through 14 February: memorial exhibition of paintings by Aksel Waldemar Johannessen at the Blomqvist Gallery, one of Oslo’s leading galleries. It is the first, and for a long time the last, exhibition featuring the artist’s work. Jappe Nilssen, the “discoverer” of Edvard Munch, and the sculptor Gustav Vigeland express great enthusiasm about the paintings. Edvard Munch himself comments: “Among the most remarkable paintings that I have encountered!” Anna Johannessen dies on 18 February 1923. Hulda Garborg takes charge of the two daughters. The “Heimen Tegnekontor” company is sold. The artist Aksel Waldemar Johannessen falls into complete oblivion.

The monograph “Aksel Waldemar Johannessen, vaar glemte maler”  (Our Forgotten Painter), edited by Haakon Mehren, is published by Gyldendal in Oslo. Opening of an exhibition at the Blomqvist Gallery.

Exhibition in Skien and in the museums of Stavanger and Bergen. Five additional paintings are found in the former collection of Kristofer Uppdal. The catalogue of rediscovered works grows to a total of 80 paintings.

Exhibition at the Leopold Museum in Vienna, curated by Rudolf Leopold. An extensive catalogue is published on the occasion of the exhibition.