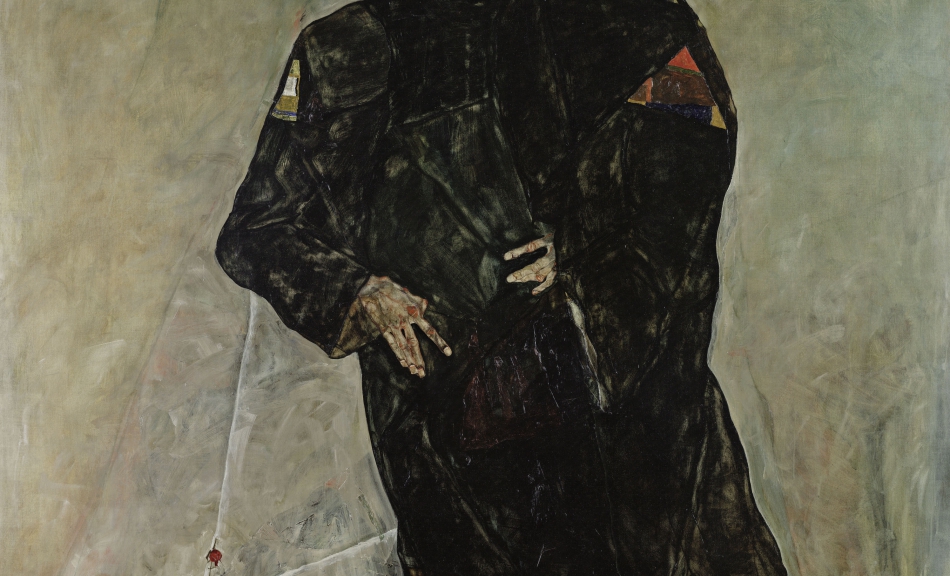 The two almost life-size figures in this painting titled The Hermits are amalgamated into a single double figure by the dark coloring of their robes. The figure on the left is Egon Schiele himself, clearly identifiable from the physiognomy, whereas the second figure shows his friend and mentor Gustav Klimt, although according to other interpretations, it could also be Francis of Assisi or the artist's father. Egon Schiele wrote in a letter to his collector and patron Carl Reininghaus: “It is not a gray sky, rather a mourning world in which the two bodies find themselves, they grew up alone in it, came organically from the ground; together with the figures, the entire world should represent the ‘decrepitude’ of all beings; one single withered rose that exhales its white innocence, opposed to the wreath-flowers on both heads.” Schiele emphasizes “how the figures remain indeterminable, they were intended to look buckled under, the bodies of those who are tired of life, suicidal, and yet bodies full of sentiment. – Think of the two figures as a cloud of dust similar to the earth which desires to amass and must collapse for lack of power.”